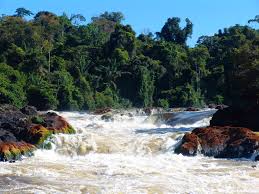 “Suriname is the smallest country in South America. But, in the regional academic literature it is always considered the largest of the Caribbean territories ”(Best, 1967). In general, we tend to include it in the socio-historical group formed by the three Guayanas (Lézy 2000) or even more, in the biogeographic configuration of the Plateau de las Guyana’s ’. “Often, Suriname is also considered part of the insular Caribbean” (Girvan, 2005). This last consideration implies a double geographical paradox. Suriname, French Guiana and Guyana have no direct access to the Caribbean Sea. In addition, like Belize, which is generally included in the Caribbean island space, Suriname is not an island proper, that is, land surrounded by water – according to the simplest definition of an island. However, currently the Caribbean cannot be defined only in the deterministic field of its name Mar. “Research related to this issue tends to increasingly shape the physical limits of insularity, and its relationship with feelings of isolation, attachment and rupture ”(Taglioni, 2003).

According to Best (1967), the Caribbean is defined as part of the great “plantation of the Americas” for its exclusive economic, social, cultural and political heritage linked to the evolution of sugar cane plantations. “Suriname, which challenged the wealth produced in the colonies of Jamaica and Santo Domingo, has always been one of the Pearls of the Lesser Antilles of the sugar necklace in Europe” (Price 2011).

For Gaztambide-Geigel (1996), a Puerto Rican historian, it is due to the sugar heritage that the Caribbean is defined as “Afro Central America” ​​- the area of ​​Central America where slaves imported, where an African-American and / or mulatto population lives . By the way, it is notorious that it is in Suriname (and not in Haiti) – where there has been a Dutch colony of at least 300,000 slaves, the first of the “black nations” of the Americas to implant and take root in the lands granted by settlers since the 18th century (Price, 2001). The history of Suriname in any of its parts is very similar to that of the islands of the Caribbean Basin (Célimène and Cruse, 2012).

From this common history, the result is a well-known national structure, a paradox marked by miscegenation – cryolization – and pluralism or social separation within relatively hermetic sub-sets in relation to ethnicity; both typify Caribbean societies. As a logical consequence of this miscegenation, Sranan Tongo has emerged as a Creole language. As in the rest of the Caribbean territories, two languages ​​coexist in Suriname, an officer inherited from the settlers and the Creole who mixes various linguistic inheritances; The African. The majority of the students of the University of Suriname who participated in the survey placed their country in the (MAP) of the Caribbean group. However, this perception map clearly shows that we are still on the boundaries of the dividing line of another region, the Amazon.

“We know how difficult it is to use indicators to measure such complex phenomena and related to the consequences of isolation” (Taglioni, 2006) The islands do not escape this problem, and it is true that strong geographical barriers such as (rivers, steep reliefs and climates severe) may influence the isolation and disruption of space more decisively than the sea. In fact, some continental areas of Canada, Brazil, Argentina, the Amazon or the plains of Central Asia are infinitely more isolated than the islands of the Caribbean or the Mediterranean Sea, for example. It probably makes more sense to locate the island’s coastline within a set of elements that contribute to its isolation.

We can also consider insularity in terms of enclave. This idea allows us to replace the linear distance that isolation implies by more adequate notions such as distance-time and distance-cost (which are applied to air travel) to appreciate the human and commercial flow of the islands. In addition, they are important indicators to measure the insularity that is or has been closely linked to accessibility. We can also consider the strong symbolic value of insularity in terms of gender. Term that allows us to say that the world is an archipelago or the planet an island. Even during the first century of our era, the geographer Strabón, referred to the world as an island:

“That the inhabited world is an island, it is the first sensitive experience that leads us to accept it. From anywhere, whatever direction allows us to reach the ends of the world that sustains us, you can reach the sea we call Ocean : where the senses do not allow us to admit it, the reason does “(Strabón cited by Létoubon, 1996, p. 10).

According to Joël Bonnemaison (1997), the world “can be seen not as a single space, but as an archipelago.” During the fifth century B.C., however, Herodotus considered the five ports of Baharia, Dakkkla, Farafra, Kharga and Siwa in the Lebanon desert as an archipelago of blessing … ??

Therefore, Suriname can be considered an island space that would be surrounded not only by sea, but also by large rivers and forests (more than 90% of the territory). Accessibility being possible mainly by air or boat as in the case of an island, to the detriment of road transport. In fact, despite the extension of the country (163, 270 square kilometers), the population is essentially concentrated on the coastline, amounting to almost 90% of the 490,000 inhabitants (ABS, 2005), being the main cities in order of importance; the capital Paramaribo, Neuw Nickerie and Albina. This is the route, the Surinamese are almost islanders, nestled between the Atlantic Ocean that stretches along the 386 km long coastline surrounded by the main rivers of more than 500 km each, Guyana and French Guyana and the immensity of the jungle that separates it from Brazil. The fact that the jungle south of Suriname is not crossed by roads, that the border rivers (Maroni to the east and Courantyne to the west) that run longitudinally, currently have no bridges and that are not very navigable, cause discontinuity and identify it as an insularity

To better understand why Suriname could be included in the Caribbean island space, let’s look at other non-island territories such as Belize or even Guyana, (located outside the Caribbean Sea) that are considered Caribbean. This reminds us that the Caribbean region is not only defined within the narrow and deterministic framework of the Caribbean Sea. For us, the image of * ‘Caribbean’ is located at the intersection between the coastal space of Central America and a cultural matrix related to a common social and historical legacy. The ‘Caribbean’ is the result of geography and history that allow us to focus on the differences and similarities between these spaces and islands south-west of the Indian Ocean or the Pacific island.